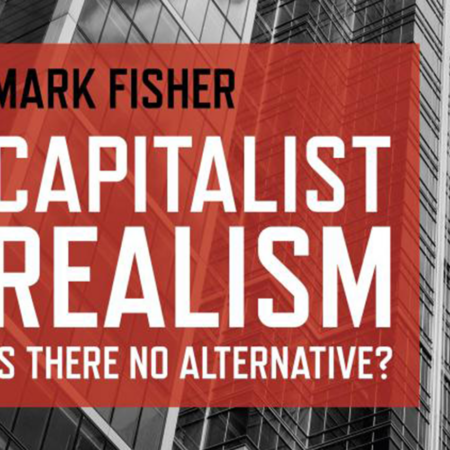 This month we will be reading and discussing “Capitalist Realism, Is there no alternative?” by Mark Fisher. The book is an analysis of the ways in which capitalism has presented itself as the only realistic political-economic system, and is available from Zero Books http://www.zero-books.net/books/capitalist-realism

Obtain a copy of the book, read it, and join us at 6pm on Wednesday 24th May in the library at FCH Campus to discuss. All welcome.

From http://www.zero-books.net/books/capitalist-realism: It is easier to imagine the end of the world than the end of capitalism. After 1989, capitalism has successfully presented itself as the only realistic political-economic system – a situation that the bank crisis of 2008, far from ending, actually compounded. The book analyses the development and principal features of this capitalist realism as a lived ideological framework. Using examples from politics, film (Children Of Men, Jason Bourne, Supernanny), fiction (Le Guin and Kafka), work and education, it argues that capitalist realism colours all areas of contemporary experience, is anything but realistic and asks how capitalism and its inconsistencies can be challenged. It is a sharp analysis of the post-ideological malaise that suggests that the economics and politics of free market neo-liberalism are givens rather than constructions.

Bad Ideas is a reading and discussion group looking at radical and influential texts, based at the University of Gloucestershire and open to all. Previous texts include A Seventh Man by John Berger and Jean Mohr, and I Love Dick by Chris Kraus.