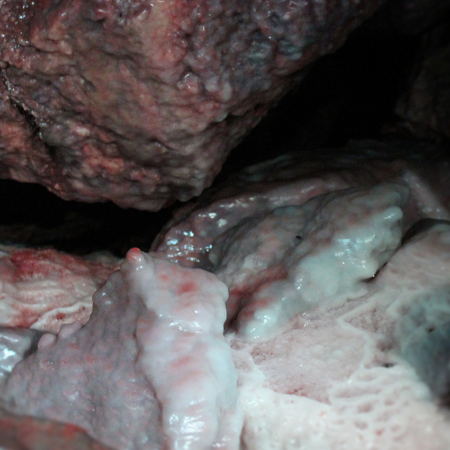 Natasha Rosling makes installations, sound works and texts that explore ways of having or being a body. She often works in dialogue with with specific locations, historical narratives, or technological inventions – blending fact, sensation and feeling across time and space.

At Hardwick Gallery, Rosling will tease out the connections between several research projects she has been developing over the last year. These include Odyssean (2016-17), a travelling radio play for the Orkney Isles that reflects on burial rituals, bodily decay and re-envisages the land and sea as a digestive organ, and Metamorphosis in the Human Realm (2016), a project that investigates the subterranean worlds of caves and man-made mines and contrasts the psychological and geological forces that surround them.

Centred around a disembodied sound work, the exhibition suggests both an alternate underground and a place of repose, positioned between a bulbous crater and discarded limbs, arcane drawings and scripts. Join us for the live performance of a collaborative experiment with Milo Newman and Daniel Clark at the event on Wednesday 16th November from 6.30-8pm.