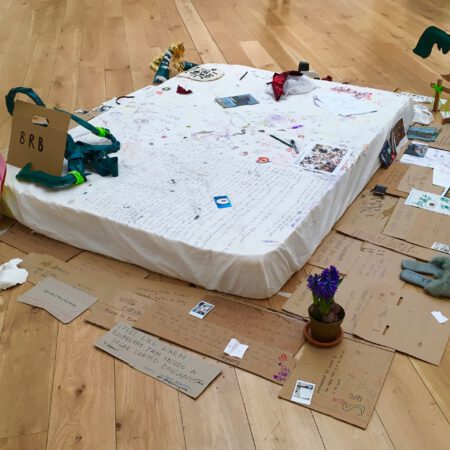 Daisies forms part of Panicattack Duo’s work Nothing Really Mattress, a travelling studio & exhibition space on a mattress that has been exhibited at Liverpool Biennial, South London Gallery, The Mander Shopping Centre in Wolverhampton & most recently at Koppel Project, London. Nothing Really Mattress is created to engage with publics through performative happenings, as well as to open a door to artists who may be isolated, through events, workshops, talks & alternative forms of curation.

The mattress is present in the gallery as an invitation to the public & students for engagement & interaction; from responding to texts and notes to using the mattress as a conversation spot, and hosting their own events and workshops.

In so many parts of the world there are examples of strong connections to magic & the occult; divination practices, mystical rituals, herbal medicinal processes. These traditional female practices have a deep relationship with the earth & hold that reality can exist & perform on different levels; spiritual, mental, astral, etheric & physical. These mystical practices make a conscious effort to perceive the earth as a living organism.

For centuries, long before the industrial revolution, the patriarchal, euro-centric structures of  society have made conscious efforts to diminish these practices as superstitious, taboo or a kind of evil custom. Women have been laughed at, prosecuted, punished, imprisoned & burnt alive. Looking at the power structures & processes implicated in the evolution of capitalism through the control, governance, domination & regulation of female bodies, as well as their traditional & indigenous practices, leads us to understand that eradicating these practices was a condition for the capitalist rationalisation of work.

‘Magic kills industry’, said Francis Bacon. The notion of magic as a threat to industry is significant in our times, where the promise of capitalist industrial development has been unveiled; exposed finally as the biggest danger to life as we know it because of its unsustainability, a danger that holds the potential of planetry destruction & human extinction.

Historically outsiders, what can the ancestral practices of women offer us today? What if the traditional practices of healing, herbalism, midwifery were not ‘professionalised’? What if we listened to the worries of those women about our future?

Panicattack are an artistic and curatorial duo, Emily Demetriou (Nicosia, Cyprus) and Naz Balkaya (Istanbul, Turkey), currently based in Margate and London respectively. First meeting in 2013, the experience and embodiment of migration led them to explore the connections between personal experience and larger social structures, and provoked the beginning of their collaboration in 2014. The duo mostly work with performance, installation, sound, video and photography.

Their respective homelands claim that they should be enemies, so they have employed the model of radical friendship to counter such national barriers, as well as to test the limits of collaborative practice. Panicattack Duo say that collaboration is their greatest treasure and that they use it as an internalised policy and a tool to rediscover the political and emotional joy that appears when we share our lives. In an era of increasing individualism, Panictattack is not only a visual tool that expresses artistic codes, but it is also a living space where weight and oppression turn into miracles.

Naz and Emily represent the notion of Panic Attack as a contemporary artistic illness which sickens the young and fresh, confining them to invisible sites. For this reason, they have also developed a curatorial practice where they try to use modes that undermine expectations of the dominant system through humour, chaos and solidarity.

Panicattack Duo studied BA Fine Art at Kingston School of Art (2013-16). Naz completed a MFA in Curating at Goldsmiths University (2016-18). Emily completed a year of MA Contemporary Art Practice at the Royal College of Art (2017-18) but then dropped out and joined Open School East, Margate, completing the Associates Programme in 2019. They have curated the series of Performance Happenings Razzmatazz (2015-2018) and have shown extensively in the UK and abroad. Panicattack were selected as part of Bloomberg New Contemporaries in 2018 and have been awarded by the Chelsea Arts Club.