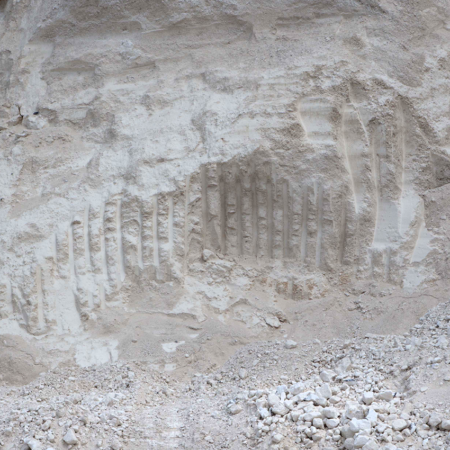 Score for a Flautist

Score for a Flautist

In his 1868 essay ‘On a Piece of Chalk’, the Victorian scientist and champion of evolution Thomas Henry Huxley began with a piece of chalk “which every carpenter carries about in his breeches-pocket”, and through geology and biology proved that the Garden of Eden didn’t exist. What struck Simon Ryder was how Huxley travelled from something so tangible and personal to the limits of understanding at the time.

It is in the spirit of Huxley that Simon Ryder is now working, creating a new narrative about climate change, Deep Time Chalk Futures, through imagining its possible impacts upon culture, and in particular on British culture and identity (as an island nation), both with deep roots in chalk. He sees chalk as a nexus material, appearing in our (pre)history (from the name Albion to the White Cliffs), in art (from ancient chalk hill drawings to the poems of William Blake), and in science (as a litmus for studying ocean acidification). Made from the ‘skeletons’ of tiny marine plankton, chalk is both a living (biogenic) and geological material. For the artist, chalk is intimately connected with time: with geological time, historic time, and accelerating current time (Anthropocene), and “how we understand time is crucial to how we confront climate change”.

Simon Ryder is creating this new narrative from a series of ‘chalk encounters’, the first of which Giants of Albion will be on display. He will be bringing his chalk studio/laboratory into the gallery for a short period in residence, working with international beatbox flautist Tadek Chylinski-Reid to create the Hardwick encounter, Score for a Flautist, which will be performed towards the end of the exhibition.