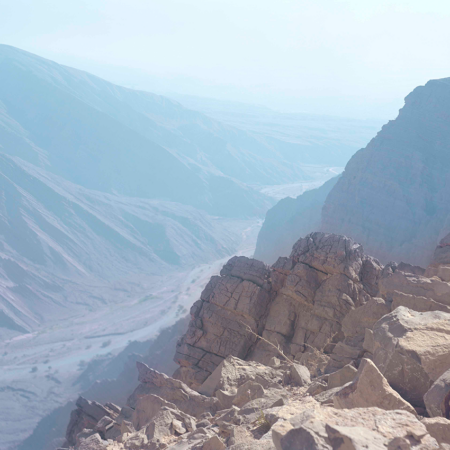 Hala (meaning ‘aura’ in Arabic’) is a series of large format photographs by Steve Macleod. It was inspired by a collection of photographs that Macleod came across whilst working in Dubai in 2008. The images were by British explorer Wilfred Thesiger, who had made several incursions into the Empty Quarter, known by Bedouin as Rub al Khali.

Macleod’s interest was sparked not by the striking photographs Thesiger took, but by a small comment he made: “In the desert I had found a freedom unattainable in civilization”.

Macleod’s work is characterised by landscape’s direct relationship to psychological states. During a conversation with an Emirati friend in Abu Dhabi, he learnt of the Al Hajar exclusion zone: “During my research people told me there is nothing to see at Al Hajar. What struck was the notion of ‘nothing’ and what it meant. I had to go there to find what that nothing might be…”

The Al Hajar Mountains run down the eastern region of the Arabian Peninsula, its range of cretaceous limestone and ophiolites separates the low coastal plains of Oman from the desert plateau. It is the highest and most inhospitable place in the region. There are few access tracks and an exclusion zone rings much of the area. Very few venture into this barren geography. Viewed from Dubai, floating on the horizon, it becomes clear this area is unlike the desert terrain we commonly associate with the UAE.

The resulting large format photographs exist within the Pictorialist tradition, works that aim to transmit emotional intent, where images are created rather than recorded. These images act as ambassadors for Macleod’s experience. They speak of a journey from desert lowlands to a stark and exposed summit – an exploration towards wellness and light.