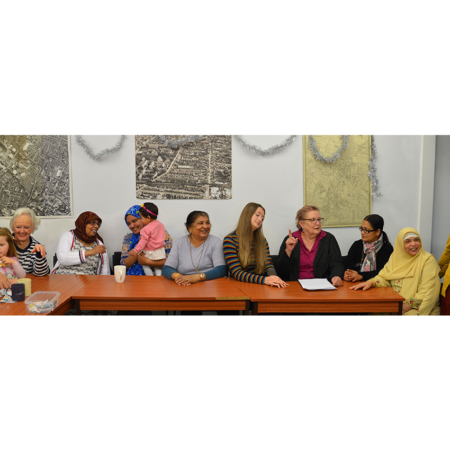 “Over the past six months I’ve engaged in stitching activities with the Sahara Saheli (Welcome Friends) group in Cheltenham, originally a community of Bangladeshi women, now an expanded group of women who consist of those who were not born in the UK. I have photographed the women of the Sahara Saheli group in groups of threes sitting at their stitching/weaving table. It is a long and narrow ‘Last Supper’ composition that will be displayed in the gallery. Squares of weaving are made by participants including the Sahara Saheli group and the exhibition-viewing public. In the production of woven squares, where each unique piece is a part of its larger construction, each maker is undertaking a performance that represents their unique participation. The woven blocks will cover and ‘pixelate’ the original photograph.”

The weaving looms are constructed with stiff card. Donations of wool would be appreciated.

Shelley Campbell is a PhD student at the University of Gloucestershire. Her research is concerned with the story of Ruth. Amongst biblical grand narratives, the story of Ruth is a gentle story in which devotion and loyalty prevail. It’s so gentle in fact that some commentators quaintly uphold the story’s events as conveying ‘the loveliest little epic and idyllic entity’. (Goethe in Bonnie Honig: 1997. Cynthia Ozick: 1994, puts across the same idea). However, as a kind of charming interlude within the larger-scaled epics within the history of the House of Israel, another generation of theologians is annoyed by this characterisation of the Book of Ruth. These theorists reject this kind of interpretation for trivialising the experience of women and for putting the Book of Ruth ‘into the genre of tear-jerking little stories where nothing much happens’. (Irmtraud Fischer: 2007). Instead, they provide evidence for reading Ruth as a relevant and powerful contemporary account of immigration, ethnic translation, and being – or living with – ‘the stranger’.

Separating Ruth from the anthropological literature on assimilation she is comparing, Katherine Southwood cites a unique aspect in the narrative. Boaz ‘recognises’ Ruth, and a pun comes about because in Hebrew the term ‘recognise’ and ‘foreign’ are homonyms, and in the sentence they are used as antonyms (Southwood: 2014, 113-4). According to Southwood, it is ethnic translation – rather than assimilation – that Boaz should ‘recognise’ Ruth, a ‘self-designated “foreigner”’ (121) (Ruth 2:6, Ruth is identified as a Moabite by Boaz’s servant; Ruth 2:10, to Boaz, Ruth identifies herself as a foreigner; Ruth 2:11-12, Boaz recognises and blesses Ruth for her notable actions – he ‘recognises her’ by her good deeds – and makes no allusion to recognising her by her ethnicity).

The shift from being foreign to being recognised is not a result of character development in the portrayal of Ruth. For Boaz, Ruth’s ethnic differences are evident but they cease to be relevant. The foreignness of the outsider, then, is newly perceived without the baggage of ‘otherness’.  For Southwood, this aspect of Ruth’s and Boaz’s relationship characterises her definition of ethnic translation. The following is what’s crucial for Southwood.

Ethnic translation consists of an acknowledgement of difference together with personal recognition,  ‘… Ruth is acknowledged and recognized as Ruth alongside being acknowledged as a Moabite’ (113, author’s italics). Alongside this level of recognition, a more deeply conceived recognition acknowledges an individual for their humanity which consists of their individual portrayal of ethical commitment. For Boaz, it is Ruth’s expression of loyalty and devotion to Naomi that precedes her ethnicity. Ruth’s moral actions go beyond the tendency to identify her simply by her origins.

In the procedure of being one amongst others and moving towards a shared goal, racial differences are overtaken through the action of creation. This project proposes that group art projects have the power to ‘precede ethnicity’, where ethnic or racial (as well as gender, class, ability, age, etc.) differences cease to be relevant.