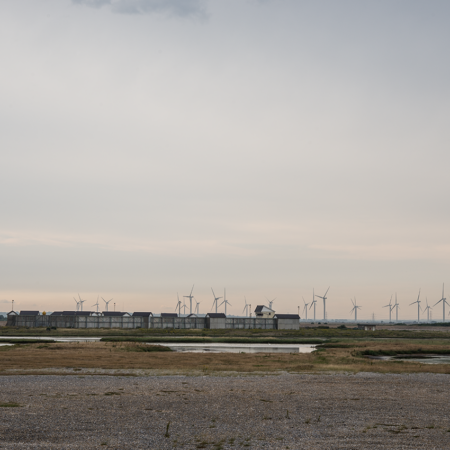 Nature Electric is an experimental documentary film that both uses and confounds the conventions of wildlife filmmaking. Shot in Dungeness and Romney Marsh in the south of England, the film depicts the Dungeness Nuclear Power Station in the context of its surroundings, which include wildlife habitats, sites of tourism and agricultural production, a military training range, a cement manufacturing plant, a site of ruined military technology, and a man-made nature reserve.

Dungeness is an extraordinary landscape known for its unique flora and fauna and it has National Nature Reserve status. Amongst artists Dungeness is known for being the site of Derek Jarman’s garden, and where some of his films were shot. However, it is also home to a human population who both lives and works in the area. Dungeness is therefore a rich site of complex human/nature relationships. Of initial interest to the filmmakers, Julia Peck and Stephen Bear, was the relationship between the nuclear power station and the numerous sea birds, which are drawn to the expelled nuclear reactor cooling water, probably for its fish, crustaceans and other bacteria. The film aims to eschew easy statements about environmental impact by considering nature and humans as co-producers of ecologies. Whilst the bird life feeding on the ‘boil’ or ‘patch’ is considered by some to be a form of wildlife pollution, for example, electricity is also used locally for moth trapping. In this sense, the ecologies of Dungeness are shown to be a part of a complex range of relationships that are neither obviously positive nor negative, but are certainly social, political, economic and environmental in their implications.

In making a film about these relationships and phenomena, Peck & Bear have aimed to convey the topographical features of the landscape but have also aimed to convey something of the flora and fauna, as well as some of the effects of living in and visiting the area. The generation and consumption of electricity in Nature Electric offers an opportunity to reflect on natural lives as they are connected to human ones. The film aims to prompt viewers to reflect on the complex political ecologies of our world.