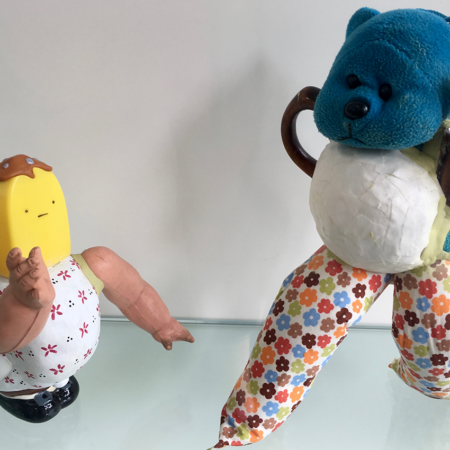 ‘Studio Models’ is a new iteration of an ongoing collaborative project between James Fisher and the Scotland-based sculptor Kate McLeod. In a previous part of the project, monotypes were made in a single weekend using a bespoke woodcut press. McLeod and Fisher rapidly drew on materials and visual language from their individual practices to bring to the collaboration. McLeod, for example, found ways of compelling the clay, familiar in her sculptural work, to operate within a printmaking process.

‘Studio Models’ represents another way of Fisher and McLeod considering working cooperatively. Fisher’s recent work deploys motifs that relate to the Japanese phenomenon of kigurumi, which roughly translates as “dressing up as a stuffed toy”. The references are used to explore particular kinds of narratives that are used in his work to conflate biography or fact, with fiction.

Fisher makes character models in the studio to draw from. These models are then sent in the post to McLeod’s studio in Scotland, where she makes version of them and responds to them in ceramic. The suite is then organised into a series of diptychs, setting up conversations between the models and their ‘ghosts’. The figure is a visual device common to both McLeod and Fisher’s work, but in ‘Studio Models’ it is adapted to foster a new pictorial dialogue.

To McLeod and Fisher this is a useful idea when considering the collaborative process. When artists are making something together, where does one voice end and the other begin? Do artists imitate their own visual voice as they enter into this kind of working relationship?