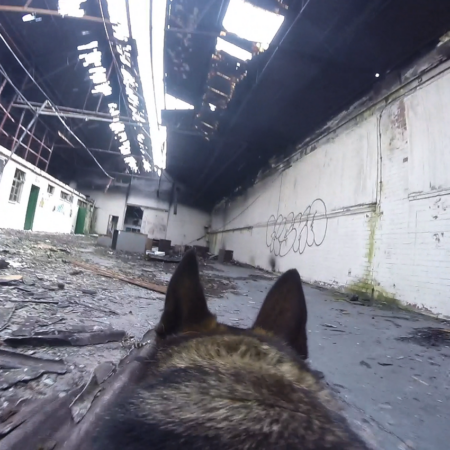 The Hellish Cycle Complete was one of three works completed by Patrick Goddard at Blackrock 2016, the artist residency program in Gloucestershire run by Matt’s Gallery and the Lydney Park Estate.

A guard/feral/rescue dog dashes around  the forgotten architecture of an industrial past. A poetic monologue delivers a brief run down of post-Fordist Britain, Brexit psychologies and ending with a kind of post-anarchist anti-manifesto. Notes to self puncture the pomposity of the primary narrator.

Creating video, publication, performance and installation; Patrick’s politically loaded and narrative based works undermine themselves with a self-defeating black comedy. Inverting the position of the aloof cultural critic, the works wrestle with the complexities of commitment and Patrick’s own fumbled attempts to create a personal and political integrity.

Patrick Goddard is an artist and writer working in London. Completing an MFA at Goldsmiths University in 2011, he is currently studying for a doctorate at Oxford University in Fine Art practice.