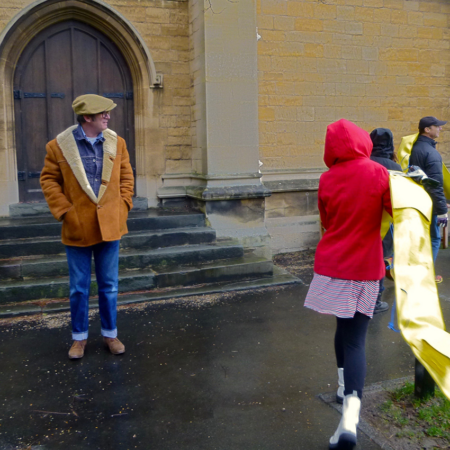 Unruly Objects is an exploration into relationships between humans and objects and their affect on each other. Using the everyday act of carrying, this project explores how objects have the power to stop us in our tracks, trip us up, slow us down and in turn how we manipulate objects to make them work for us.

The public were invited to join a series of walks carrying three objects that were built during a week long residency at the Hardwick Gallery. The walks were spread over five days and were between half an hour and two hours long. The routes were mainly unplanned and decided by the group on the day.

Through replicating the everyday act of carrying, but defamiliarising it through the abstract nature of the objects and task, the project draws attention to space, objects and how we navigate them. It also ponders upon the act of carrying things as a means for people to be locked momentarily in heightened awareness with others.

By moving the objects as a group, Unruly Objects explores co-operation through a mutual and well-known task, looking at verbal and bodily communication to do so. Unexpectedly throughout the week, a nomadic classroom emerged, in which the project and other experiences were discussed by participants after the walks, over a cup of tea.

Filmed from two perspectives on the objects, the unmanned cameras capture the series of journeys through Cheltenham’s streets and hedgerows, conversations between participants, various reactions and interactions with the public, tight squeezes, lifts over walls and further navigations of space and each other. The headphones enable you to listen to the journeys and conversations.

Alexandra is currently a co-director of RARA, a co- operative workspace, and a member of Collaborative Research Group, a group of artists interested in exploring the pluralities of art practice (organising, writing, curating), based at CRATE in Margate. Largely working in the public realm Alexandra Parry has had temporary and permanent work commissioned in various public spaces in the UK. She has exhibited at The Slade Research Centre, CRATE, The Roundhouse Theatre, Amnesty International and Quay Arts. Her BA in Social Anthropology and Media from Goldsmiths College, University of London has informed and influenced much of her practice.