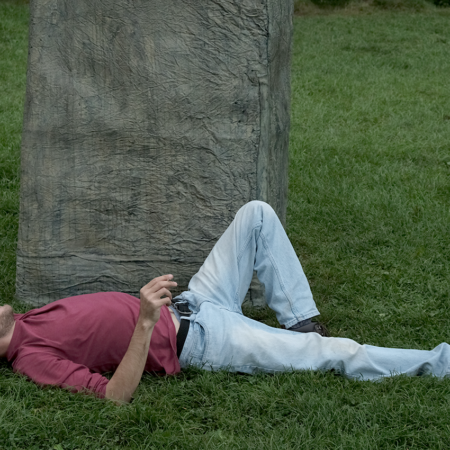 Tony Clancy is a senior lecturer in Photography at the University of Gloucestershire whose artistic practice balances observation of the natural world with a relish of spectacle and performance. The film presented plays with sound, movement, time, and the language of the camera, as well as cultural associations.

Stone Ghosts began as a sound work, a recording of the act of banging rocks together. The video that has evolved is accompanied by a soundtrack by musician Mike Adcock. Mike has an extensive knowledge of lithophones (musical instruments made from stone – see lithophones.com) and here plays on rocks from a quarry in the Preselli Hills in west Wales, the source of the large blue stones that were taken to Stonehenge. Recent research has suggested that the rocks’ acoustic properties may have been the reason that Neolithic people valued them, and undertook the feat of moving them across the land.

“It was Schopenhauer who claimed that music brings us into contact with the Ding an sich: it renders directly the drive of the life substance that words can only signify. For that reason, music “seizes” the subject in the Real of his or her being, by-passing the detour of meaning: in music, we hear what we cannot see, the vibrating life force beneath the flow of Vorstellungen…”