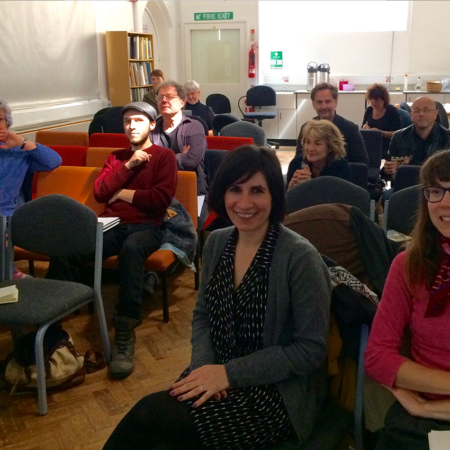 The one-day Cultural Dreaming symposium, co-ordinated by Sarah Bowden, curator of Hardwick Gallery at the University of Gloucestershire, set out to consider the gallery’s role in social activism. Artists and curators were invited to respond to some key questions, for example: who is responsible for creating social spaces? Can galleries can act as locations for engaging with ideas and possibilities, by becoming rehearsal spaces for how we might live? Might galleries offer a public facility to focus on what we need from local infrastructure and explore what makes a community?

The day was introduced by Bowden, who gave some context to the symposium and explained where its name came from:

The term Cultural Dreaming emerged over a series of conversations that explored the social function of galleries. In many ways, holding on to these symbolic structures that enact the presentation of art to audiences in designated spaces can, in the 21st century, look slightly archaic, if not deeply conservative. So how are galleries to continue to reach people, in real life? (Bowden)

Bowden explained that this symposium is part of a wider project that has been co-created with residents in the communities around the University. That project aims to develop and support creativity in the area over the long-term and the first series of workshop commissions has just been launched. These will take place with residents over the next few months. The work produced during the workshops will be presented at Hardwick Gallery in September, which will itself transform into a social, active space rather than a formal, viewing space. Chair for the day, Jean Boyd, added further enquiries to the mix: on this day before the general election – what kind of society are we dreaming of? What spectres haunt our futures?

Boyd trained in Fine Art and Theories of Representation, and has been a lecturer for 25 years. She has worked at UoG for more than 10, lecturing in the History and Theory of Art and Design. She encourages students to make issues and ideas visible and communicable and has a deep interest in interrogating our contemporary circumstances. Boyd believes in art’s ability to create critical spaces where we might explore not only what is, but what could be, or perhaps what should be.  Referring to the proliferation of social engagement, Boyd proposed that something is emerging that expands what art practice is, or could be. She asked “Is socially active art now, filling the void left, or is it exactly where it needs to be?

Good question which prompts another: how will we know if (when) we are where we need to be?

The invited speakers offered wide-ranging thoughts that made for a very active dialogue around these issues. Ania Bas is an artist and curator who works across text, performance, publishing and social engagement to create situations that support dialogue and exchange. She is the Curator of Local Audiences at PEER, on Hoxton St, London, a gallery next door to the post office, opposite the community college and library, close to a primary school. PEER is deeply embedded in an area of social housing, the gallery is rented, it too is a tenant. The frontage is now a span of glass, (it was once two shop fronts), with artwork visible from the outside, welcoming people into the space and making it a socially active venue. They’ve worked with numerous socially-engaged artists, such as Andrea Luka Zimmerman, who engage with residents both inside the gallery and beyond. Questions from the floor were fascinating, raising discussion about gentrification and economic exploitation. Bas is very clear on those issues, as they are core to PEER’s thinking, as is their role to ‘protect art’. An excellent term, considering how easy it is for socially-engaged practice to lose its identity as an aesthetic art practice.

Emily Gee works between the Exhibition and Collaboration Programmes at FACT (Foundation for Art and Creative Technology) in Liverpool. Gee led on a project with men in prisons, using gaming as a way of exploring social responsibility and violence. Notions of masculinity were explored, expanding on the Army Recruitment campaign which uses the strapline “this is belonging”. The game was filmed in a prison, a place where technology is threatening, providing information and access to knowledge. Information is considered dangerous, both inside and outside. Gaming too is a taboo in prisons, by its very nature it is enjoyable, yet prisons are places of punishment. These things made the project susceptible to media criticism, especially during austerity which is causing cuts in prisons and removal of certain privileges. Gaming is considered a privilege that must be earnt, and as such can be used as currency to trade with.

FACT uses VR and gaming in an innovative way, to investigate and scrutinise male identities.

Viviana Checchia is the Public Engagement Curator at CCA Glasgow. For the past five years, Viviana has co-directed ‘Vessel’, a platform for critical discussion around the cultural, social, economic and political change created through community-based work, based in Puglia, Italy. She began by relating to work by The Artists Placement group, that stated “context is 50% of the work”. She has worked with several established socially engaged artists, such a as Tania Bruguera and Katia Kamelli. A work by Asuncion Molinos Gordo, called ‘Contestador’ (Spanish for answer phone), played stories about the bureaucracy of farming on an answer phone. It was recreated in Glasgow and the farmers stories were remarkable similar, the frustrations shared.

Pick up the business card, ring number, hear message. The answer phone prompted: “What are you calling about? Press 1. To invoice 2. For insurances 3. For taxes 4. For loans 5. For subsidies 6. About my land 7. To sell me a tractor 8. To sell me technology 9. To buy my produce 0. To leave a message

Presenting the work via an answer phone process, one we are all too familiar with, it was experienced via the very equipment that makes a farmers life hell.  The farmer is rendered invisible. Checchia described this as “a responsible way to share this issue.” Responsibility was a term used often during the day, for good reason.

Anna Chrystal Stephens is an artist and member of Vulpes Vulpes; a collective interested in social histories, the built environment, notions of community, education and social structures. Stephens raised rich dialogues around the issue that documentation is not the work, something that she had been struggling with herself. Much of the work she does using a process that acts a social archaeology and locations. Having a desire to engage in local communities and places of gatherings, she sought to suspend notions of class and formality. One project dug up the history of a site used for raves in the 1990’s, taking a playful look at archaeology and the excavation of site. Was the prohibition of repetitive beats and large gatherings actually dangerous for the public, or was it dangerous for authorities? Stephens, too, made reference to responsibility, asking “Where does responsibility end, or begin?”

It was a day that raised many questions and maybe far fewer answers, which is what a good symposium should do. In answer to the question “So how are galleries to continue to reach people, in real life?”, I believe ‘responsibly’ would be a short, sharp, reply. And in response to the question “how will we know when we get there?”- we need to keep talking, researching and evaluating, working with communities, whilst always protecting the art.

Carolyn Black is a producer, writer and artist.