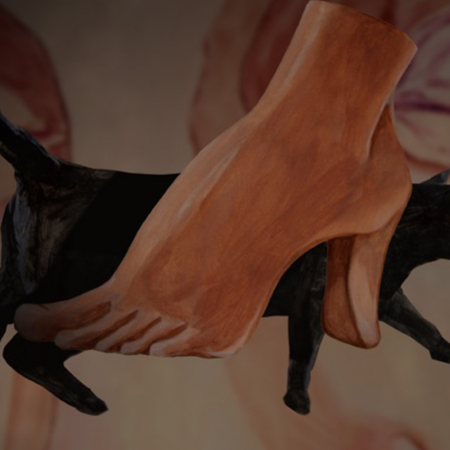 W.I.T.C.H. draws on research into feminist science fiction stories read through histories of feminism’s so-called “second-wave” of the 1960s and 1970s. Employing techniques of painting and digital animation, W.I.T.C.H. takes feminist fan fiction as a model of engagement: appropriating imagery, characters and settings from different sources and re-mixing them to imagine new narrative possibilities. In this way, the work makes reference to two SF texts which offer visions of post-revolutionary worlds of women – Sally Miller Gearhart’s The Wanderground (1979) and Monique Wittig’s Les Guérillères (1969), as well as the work of LA-based women’s music collective Olivia Records and the American radical feminist groups active under the name W.I.T.C.H.

Histories of feminist movement record several versions of the acronym “W.I.T.C.H.” – ranging in tone from the faintly sinister, “Women’s International Terrorist Conspiracy from Hell”, to the humorously absurd, “Women Interested in Toppling Consumer Holidays”. In this work, these multiple meanings were taken as an open invitation to construct further alternatives – interweaving fact and fiction to proliferate further meanings for “W.I.T.C.H.”

Through an imaginative engagement with these marginal texts and contested histories, this new body of work explores the notion of “sisterhood”, the construction of separatist communities, identifications with/as “women” as a political category and other strategies employed by feminists awakening to a new politics of identity – including the writing of SF in itself. Working through this previously male-dominated genre, feminist writers found a narrative structure within which the impossible could be enacted. Feminist SF invented social structures, gendered relations and ways of being that had not happened as alternative realities, counter-histories and utopian futures. Inspired by this methodology, W.I.T.C.H. offers a re-vision of feminist histories – transforming source texts, archetypal figures and historical narratives into new speculative fictions.

Revising History is a two-part programme comprising three exhibitions of new moving image work by Richard Billingham, Kathleen Herbert and Anna Bunting-Branch at Hardwick Gallery, and a one-day symposium of screenings and discussion with the artists and invited speakers at the University of Gloucestershire, and panel discussion at The Wilson Art Gallery & Museum.